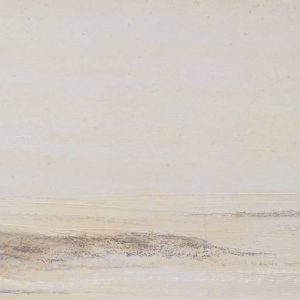 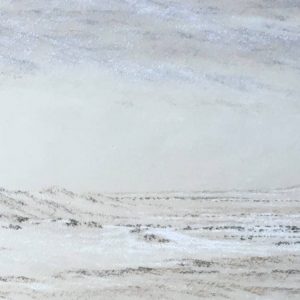 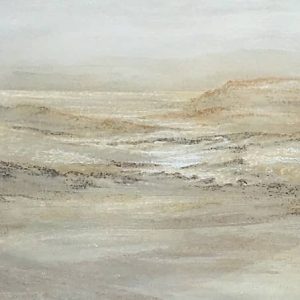 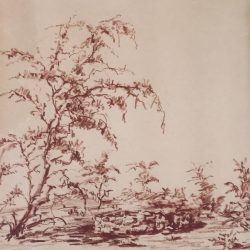 shades. By applying the colors in horizontal lines, he created an illusion of oscillations in the desert, which his main subject was. His style can be described as semi – abstract.

He returned to Namibia in 1960 and has been in employed in Walvis Bay and Windhoek before he opened his own architect studio in Windhoek in 1962.

Before the Namib Desert became his main subject, Arnfried Blatt was the edge of the Etosha Pan his preferred subject.

He often went with his Land Rover into the desert; spend even weekends and holidays alone out there, always searching for the highest point to get the best view into the distance. The first step of a new painting was often only a very rough sketch. In step two he prepared a board with a special sanding technique that gave an underlying texture for the future painting. Step three was followed by applying PVA paint as an undercoat, often added with pumice powder and marble split. Going back to the same scenery and starting to paint was step five.

He painted in several subcutaneous layers, most of them hidden from the viewer at first glance. When a light source illuminates them, the painting however, attains a life on their own.  The artists described his work as brilliance without color, textures without contrasts, form without definition, distance without perspective, sunlight without warmth and sunbeams without sun.

During his limited lifetime Arnfried Blatt created just over three hundred paintings, of which his widow and children have about fifty in their possession.

When I become one with the essence and spirit of the endless plains, then, and only then, can I record the radiance, the light, the glow that lights – and dominates – the spirit and burns the emotions. This radiance is present, even under the heaviest fog, and proves to me – over and over again – that the basic essence for a desert landscape is for the spirit and the mind. It´s emotional impact is a joy to paint, and it´s my life.