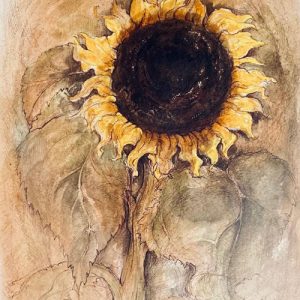 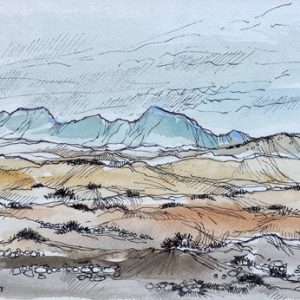 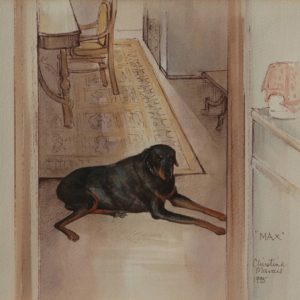 Resided to Namibian in 1970

Studied Fine Art at the University of Witwatersrand 1954 – 1957 under Charles Argent,
Joyce Leonard, Cecily Sash, Professor Heather Martienssen and Erica Berry. Obtained a
Bachelor Degree. Became a senior teacher in art at the Jeppe Girls High School in
Johannesburg 1958. Her marriage to Piet Marais, a geologist, meant she spend the
early years of her marriage camping around parts of South Africa. This gave her the
opportunity to paint and draw all over the country. The family settled between 1963 –
1970 in Rustenburg and Christine became a co – founder 1964 of the Rustenburg Art
Society. Since 1965 she taught both children and adults in her own studio.

She moved 1970 with her family to Windhoek and settled later in Swakopmund.
Fascinated by the old buildings in Swakopmund, she decided to capture their
atmosphere in her works. As she could not find any information on the history of the
buildings, she realized the need for a book with illustrations and history of the old
buildings. “ Swakopmund – our heritage “ was published 1979.

She has been commissioned with a large diorama by the Department of Agriculture and
Nature Conservation for the 1988 Flora Exhibition in Goodwood, South Africa. The
diorama “ The Namib Lives “ consists of 14 panels, each 1000 x 2000 mm ) depicting
the vegetation of different Namib Desert regions and includes conservation aspects is
permanently installed in the Windhoek Herbarium.

Numerous illustrations, which includes a triology of books on historical buildings of
Swakopmund, Windhoek and Lüderitzbucht, Geomorphology field guides for the Desert
Ecological Research unit and Rössing, the mine, the flora, a limited edition by Hirt &
Carter. Illustrated Old Swakopmund, Today, 1992, Etosha Experience by Anna Louise
Marais 1995 as well as general and educational title and children fiction. – Together
with Particia Craven she has written and illustrated: