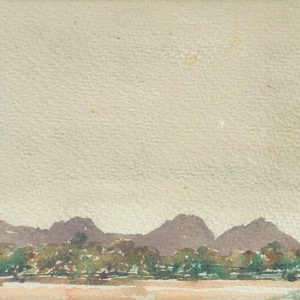 He studied Fine Art at the Staatsakademie für Bildende Künste in Dresden under Otto Gussmann, Karl Kühl and Oskar Zwintscher. He has been awarded with the Staatsmadaille of the Kingdom Sachsen in 1913, a travel grant award, which enabled him further studies in Paris, London and Italy.

After his studies he settled himself in Dresden and designed some art nouveau interior decorations for a Bohemian company. As the master painter of this company he had several assistants. – Also he has been successful  in his profession his relation with his wife and his child was difficult. In addition the political changes in Nazi Germany lead to an journey to Namibia and Jentsch decided to settle in the unspoiled beauty of the African country, which summarized his life philosophy. Therefore he accepted an invitation to visit friends, the Dietterles, on their Farm Kleepfrorte.

Jentsch identified himself with the words of the well – known  artist Vasili Kandinsky that the spiritual approach, the painter´s soul, must become visible in his art. – The exhibition of old Chinese paintings in Dresden had an unbelievable impact on Jentsch. He has been fascinated by the brilliant calligraphic style of the landscapes and meditative attitude painted in silk taking in consideration that Jentsch has been the son of a dignitary of the Lutheran Church. This fascination accompanied his whole life and his works.

When he immigrated to Namibia in 1938.Soon after his arrival, he met neighbouring farmers, Gebhard von Funcke and his wife Dorothea.  He settled 1947 at the Farm Brack close to Windhoek , owned by the Family von Funcke. – In his early years he travelled extensively and has been a welcomed guest to many farms. – A box, specially designed by him, contained his pre-mixed colors in tins and the paper had been laid out in the box, after a Chinese model, enabled Jentsch to work outdoors. He preferred to work in a sitting position and he used to absorb the early morning hours, absorbing the sunrise and the effect of the sunlight on the landscape. He waited for the inspiration and only than he started to paint with unique brush strokes a meaningful composition.

When the news reached him, that his studio, his best paintings and his collection of rare Chrinese objects d´lárt had been destroyed in Dresden in 1945 and he found solace in Namibia and adopted the country.

While visiting Swakopmund, the old former cheese dairy, which Jentsch used on the Farm Brack as his studio burned down in the 1975. Jentsch “ The Meister “ he was called at that stage has been always reticent about selling his works. He had hoarded much of his works in cupboards and tin trunks in that “ gallery “, with the result of 40 years, including some of his most important works, have been lost in the flames.

A documentary film on Adolph Jentsch, directed by Olga Levinson, was produced by the Friends of the SA National Gallery in 1970.

1958 on his 70th birthday, a retrospective exhibition was arranged in Windhoek and a souvenir book published, containing reproductions of his watercolors and introducing essay by Professor Otto Schröder.

1973      Philatelic history was made in South Africa when for the first time paintings were used as motifs for stamps. These were five reproductions of Jentsch landscapes.

Jentsch himself wrote numerous essay´s like Land Eternal, which have not been published so far.

A book about Adolph Jentsch by Olga Levison was published 1974