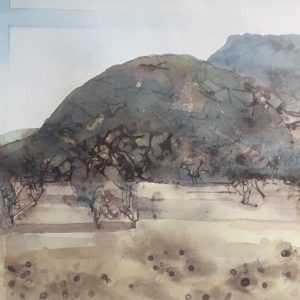 He has been interested in paintings since early childhood but did not contemplate it as a career. He crossed the border to West Germany in 1951.

Immigrated 1952 to South Africa as a mining recruit. First private art lessons with Mrs Raath in Welkom, 1958. Took evening classes with Cecil Skotnes, Jan Buys, George Boys and Bill Ainslie at the Witwatersrand Technical College 1961 & 1962 and studied Fine Art via UNISA 1965 – 1969 and obtained a bachelor degree. During his annual leaves he travelled extensively on foot and on his motorcycle. Visited 1960 Central & West Africa. He visited Namibia 1962 with Jan Buys and started to paint Namibian landscapes. He became a fulltime artist in 1962, but returned to an employment in the mining industry 1964.

Due to the limited formats of watercolor paper, Schwanecke has resorted to multiple panels for his panoramic views. The image was spread over several sheets into diptychs, triptychs and sometimes as many as seven panels. 1981 he produced “ Edge of the Namib “ which has been reproduced by Howard Swan, Johannesburg, four separate units with a dimension of 60 x 1560 mm.

1981 he retired from the research sector of the department of mines to become a full-time artist.

1988      Life Membership of the Watercolor Society of South Africa