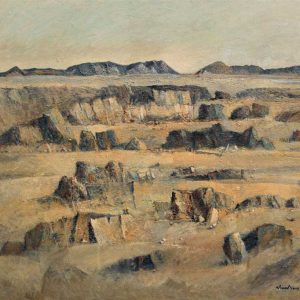 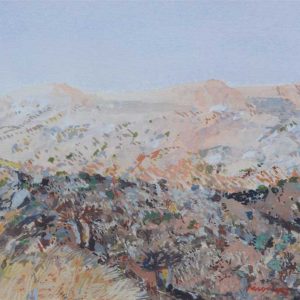 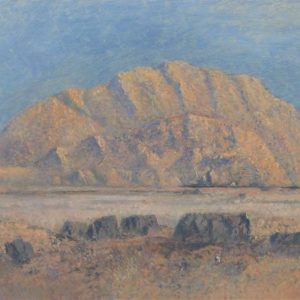 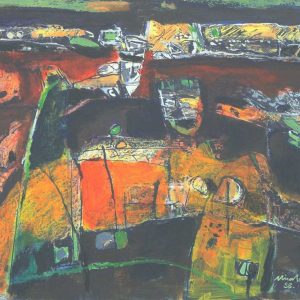 Born in the Herbert District near Kimberley, he moved to Namibia with his parents in 1950. He initially studied under Banie van der Merwe in 1956 and privetly under Professor Otto Schröder in Windhoek for two years before attending the University of Pretoria in 1960.

He has been requested to write a paper on Adolph Jentsch and met the artist. Jentsch was to have a strong guiding influence on Nico Roos and remained a firm friend until his death in 1977. He graduated in 1963 with a Bachelor of Art and after five years of informal studies under Adolph Jentsch, gained a Master of Art in 1970. He attained a Doctorate in Philosophy in 1974 from the University of Pretoria.

In 1972 he was responsible for the introduction of the Fine arts training program at the University of Pretoria, becoming the Head of Department of Fine Arts in 1978 and Professor in 1979. A position he held until 1999 when he retired at his farm in the Khomas – Hochland of Namibia.

He held over 20 solo exhibitions and took part in numerous group exhibitions. In 1991 the University of Pretoria held a Retrospective Exhibition of his work and he was presented with a Silver University Medal by the principal of the University in recognition of outstanding achievement. – He is regarded as one of South Africa´s and Namibia´s most important artists. In 1998 he was awarded with the Medal of Honour for paintings by the South African Academy of arts and Science – the highest award to an artist in South Africa.

He passed away in 2008 due to a heart attack during his last exhibition.

His works can be found in major South African art Museums, many private and company collections in South Africa such as UNISA, Sasol and the Pretoria Art Museum to name a few. His work is also represented in the National Art Gallery of Namibia.