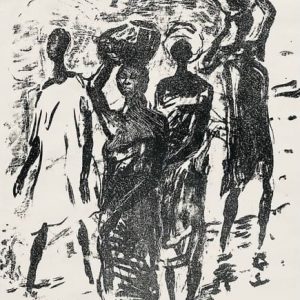 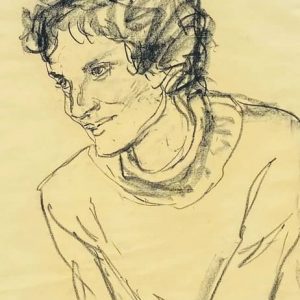 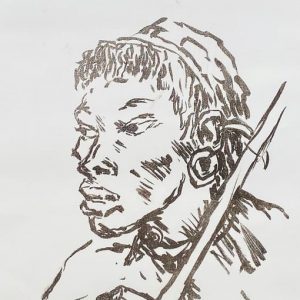 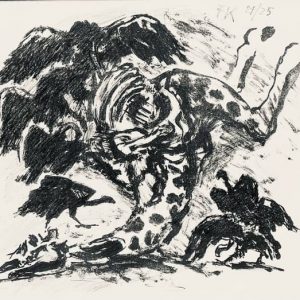 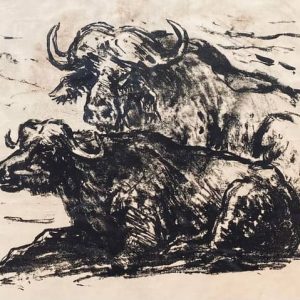 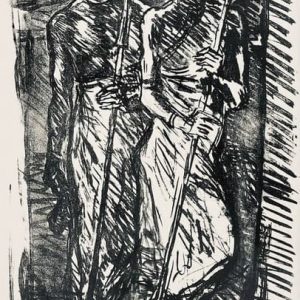 19.12.1913 – Berlin, Germany
28.07.1966 – killed by an elephant near the Oacatan River mouth, Anaikatty Jungle, India
Resided to Namibia in 1951
Worked in oil, watercolor, pastel, gouache, ink and charcoal, lithographic works; subject matters:
wildlife, figures, portraits and landscapes
His talent and his obvious fascination of animals and determination was first recognized by the director of the Berlin Zoo, who watched that young school boy, that visited again and again and made sketches
of the Indian elephant Harry and the gorilla Bobby. He presented him a yearly ticket which enabled Krampe to complete his drawings. His school books have been filled with animal sketches and his
decision to become an artist was a logically result.

Studied Fine Art at Vereinigte Staatsschulen für angewandte Künste in Berlin, 1931 – 1933, followed by a study 1933 at the Kunstakademie Munich under professor Ferdinand Spiegel. Interrupted by a
military training in Berlin 1934, he continued his studies 1934 – 1939 at the Preussische Staatsakademie für Bildende Künste under Professor Hess in Berlin, where he became a master student.

Krampe remained an adventurer all his life. – His first adventure took him to Siberia on a trawler and his drawings of the reindeers and whales have become an asset to him, as he was commissioned with
the illustration of several books like Moby dick etc.
With begin of WWII Krampe has been with the German army in Poland, France and the Africa Cops in North Africa, 1939 – 1941. He was imprisoned 1941 and was in the camps of Egypt, Palestine and Australia.

He returned to Berlin 1947 where he stayed until 1950 and did some book illustrations. The fact that he resided in Namibia was actually by accident. While trying to apply for a Visa for Australia, where he was impressioned for five and a half years, the lady assisting him suggested that he goes instead to South Africa, saying this could be arranged immediately. He arrived in Cape Town 1950, where he
received some commissions and had his first exhibition in July 1951.– He loved Etosha when visiting Namibia and stayed on his first visit two month with the then chief warden Barnabe de la Bat.
Krampe finally resided in Namibia in 1951 and made his home, if it can ever be said that he ever rested long enough anywhere to call it home.
He married Herta Dickmann, a photographer, but have been divorced only three years later. – Nevertheless, he continued exploring the country, Zanzibar and Angola, Kenya and Uganda. His articles
on wildlife, supplemented by his own photographs on his journeys, appeared in various publications, amongst others, the local newspaper “ Allgemeine Zeitung “.
For his work, Krampe never used his photo graphics, he rather went into the bush, watching, studying and composed the work in his studio in Windhoek. He was fearless, according to his friends, he encountered a leopard in the bush, just to study his movement closer. He preferred a perspective on animal existence which was dramatic and dangerous rather than romantic and used these scenes for his artworks. Krampe ́s animals are fighting, attacking, fleeing, devouring their prey, tense and watchful or even dying and decaying – the ongoing fight of live and let die. He had a preference for the
less graceful inhabitants of the wilderness such as hyenas, gorillas, rhinos, wild dogs and vultures.
Bucks and smaller delicate animals have been more seldom. Although Krampe did some paintings of figures, portraits and landscapes he is counted as a wildlife artist.
Krampe visit to East India in 1966 was the fulfillment of a lifelong desire, to finally encounter the Indian elephant in his natural habitat. When the elephant broke through the bamboo, Krampe took up his
binoculars to observe it more closely – a typical Krampe gesture. Suddenly the elephant veered round and charged Krampe and the wildlife expert Radcliffe. Both men ran for cover, but the elephant
overtook the younger man who was fatally pierced through the right side of his chest by a task. Until a searching party found them the next morning, it is said that the beast stood guard over Krampe ́s
body. A memorial award – “ The Fritz Krampe Award “ -is given annually by the Madras Art Club, India. Krampe is buried in the graveyard of the Evangelic Church of St Thomas in Oatacomund.
All the virile power of his personality was compressed into the works he produced. Compressed rather than concentrated, the energy often out – scaled the format. He liked largeness and enjoyed working
on a mural scale.